As Thomas called me the official Photographer of this year’s BlenderDay 2011, I want to present my results of the first day of the event here, surrounded by small bits of text to explain and complete what you see.

Have fun, because that was what we had. A lot of it.

Arriving at the event, the anticipation of the people slowly filling the rooms was very visible. 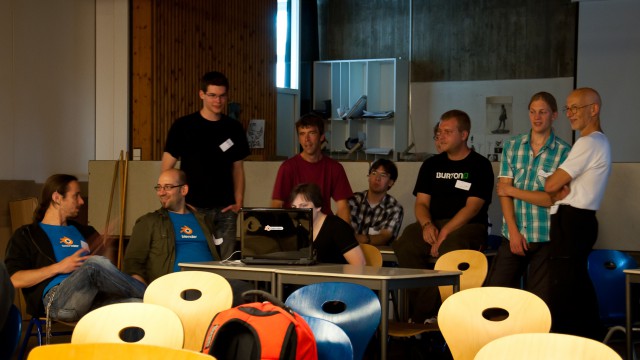 As important as the talks and contests at the event are the times in-between, the moments of talking, sharing knowledge and just getting to know new, interesting people. That is why the talking began long before the doors of the Erich Kästner Gymnasium in Eislingen/Fils in southern Germany were opened – and why the opening announcements of Thomas Dinges can only be called the second subject of the event programme. With a new record of almost 50 people present, there were many people raising their hands when asked who came to Eislingen for the second or even for the third time. The first real presentation came from Immanuel Günther and Thomas Hintz who just released a book on Materials in Blender and gave an interesting insight into how the eye can be fooled when trying to identify colours, perspective and materials in the real world and on photos – and how knowledge about different phenomenons can help us choose the right settings in Blender.

Included in the talk was a workshop. We were given some small sample objects and the task was to create the material of the object in a given sample scene. About half an hour later, the small groups presented their results, and they were quite impressive. Also, almost everyone had learnt something from working together with other people and chatting about techniques and settings. 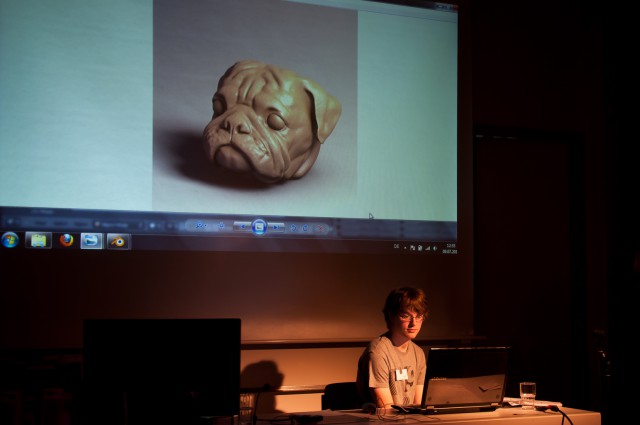 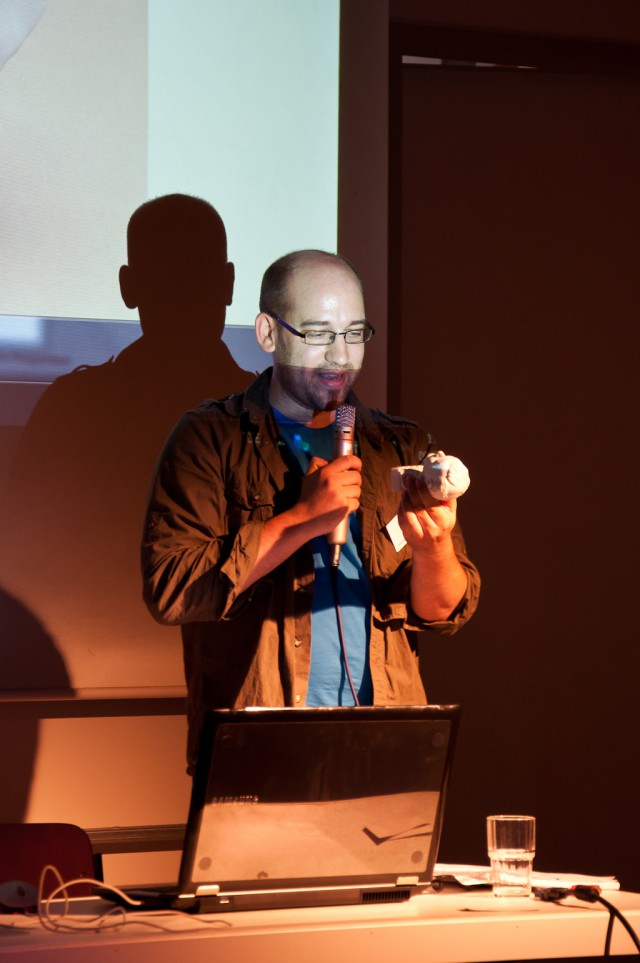 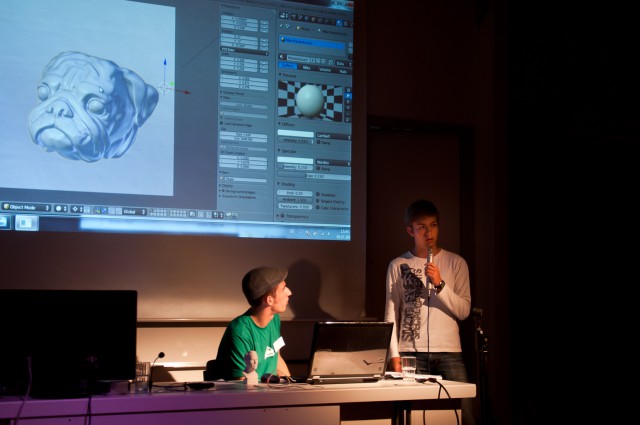 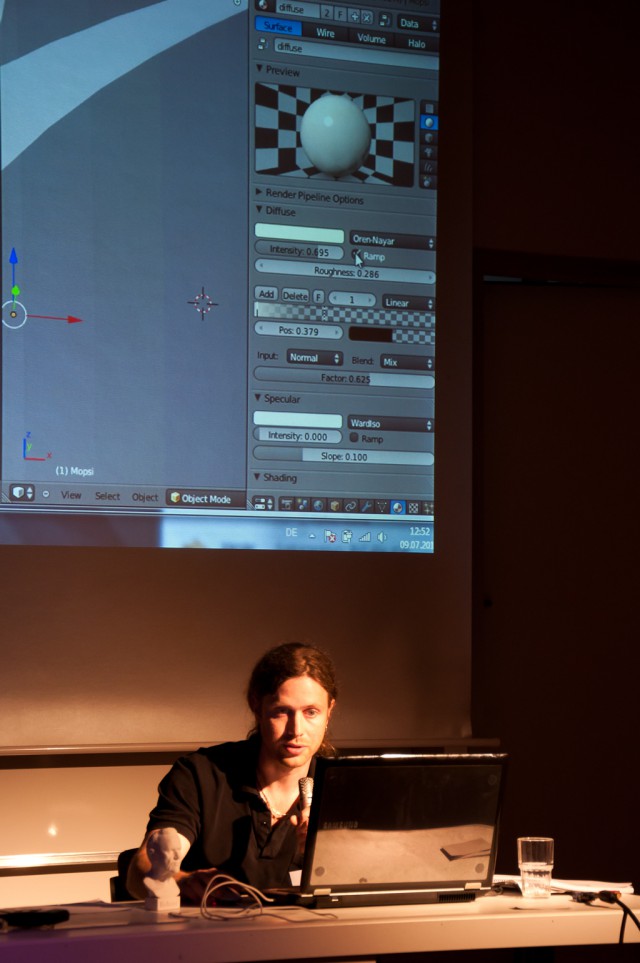 After a lot of interesting material, people were hungry and the kitchen team had prepared wonderful noodles with Bolognese sauce, salad and chocolate and vanilla ice cream. More than enough for everyone.

As every year, we used the school cafeteria as background for our group photo.

Then, Thomas introduced us into the new Blender release cycle and the render engine “Cycles”, … 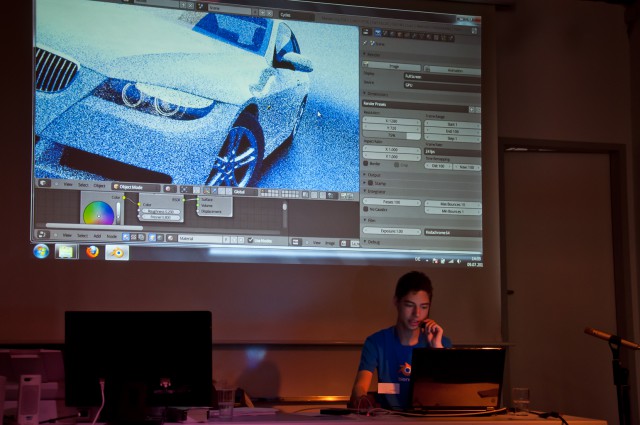 … followed by Jeroen Bakker, showing the current status of his OpenCL Compositor project (being not OpenCL, but completely awesome instead). The audience demanded the nodes he had developed to be added into trunk within a day, and the speed of the new compositor was just overwhelming. 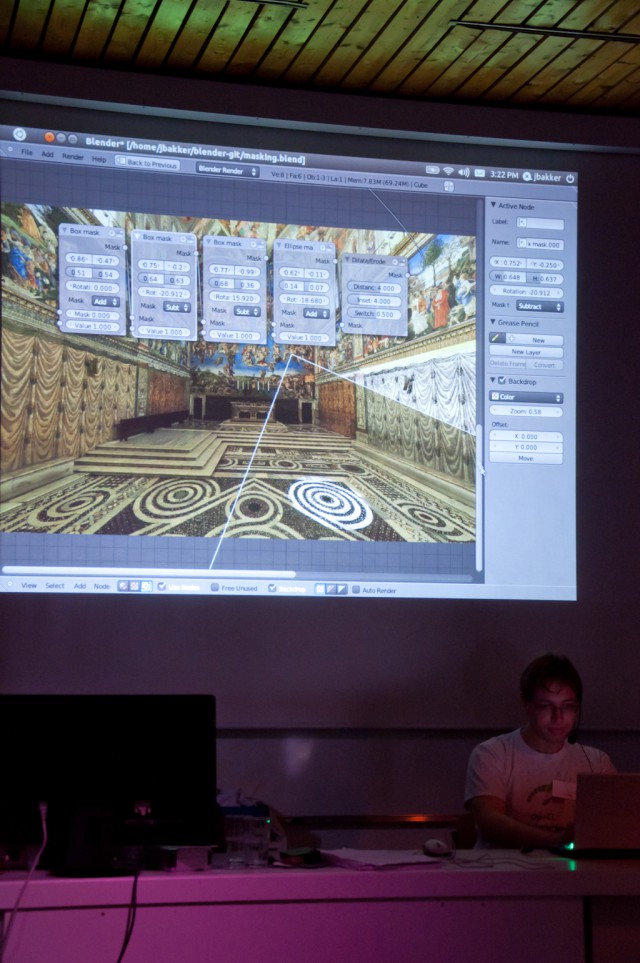 Please go to his website to donate, helping him complete the project.

The following break was used to eat cake and drink coffee. And for talking, a lot of talking. 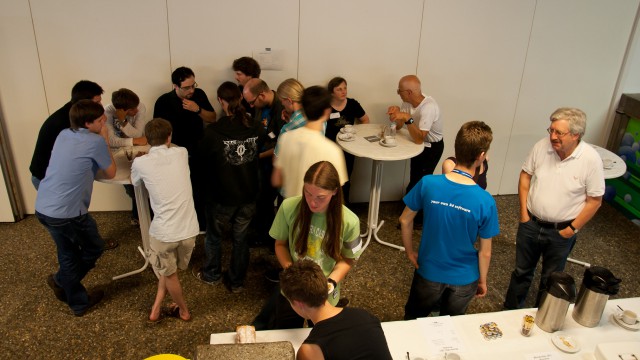 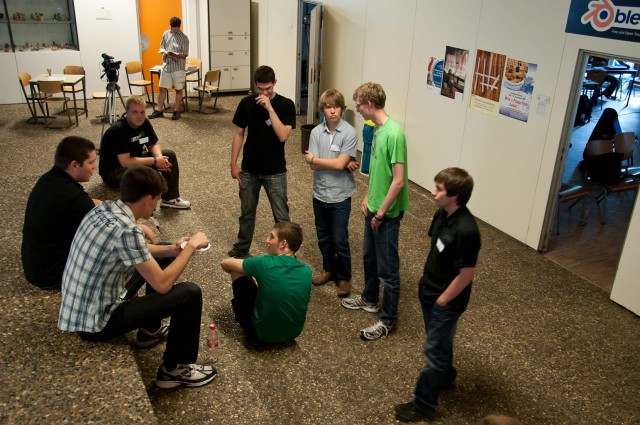 Next came Sebastian König, showing us the completely exciting development that went on in the Tomato branch in a time span of only about two days prior to the BlenderDay. After a simple application of 2D-Tracking, he went on to a stable, usable, user-friendly and seemingly almost-finished 3D-Tracker, within Blender. Enough words, see his excitement with your own eyes.

That he was able to show us the workflow for projecting some video onto a filmed canvas and for positioning a 3D-Object into a video including the necessary compositing (not including 3D-Tracking itself, would take a little longer to set all the points) for realistic shadows says enough about the speed of the new system. Also, the problems he mentioned (focal length formula) are already fixed as I write this.

With so much matter to talk about, there was also no problem to fill the next break.

The last talk of this day came from Beat Reichenbach who gave a comparison between Cinema 4D and Blender, showing some areas where Blender could learn from the commercial rival (mainly concerning the Outliner, Animation tools and the node programming system of Cinema 4D, being more artist-friendly than python-scripting in Blender). 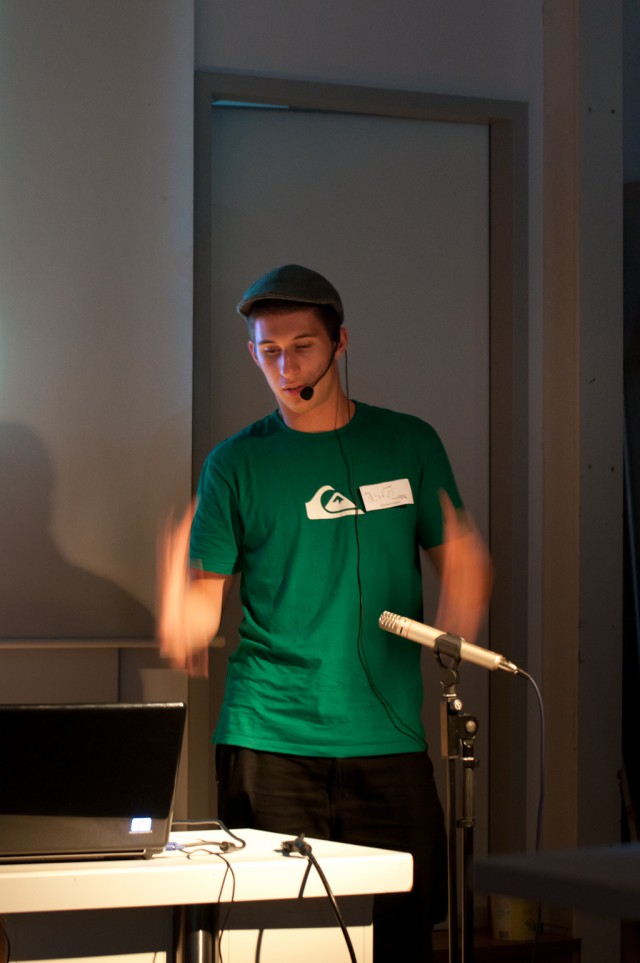 He also told us that he is allowed to model and texture in Blender and import the finished models into C4D at his current employment, showing that some people in the industry are open-minded in this direction.

After that, it was time for dinner and the presentation of the winners of the first BlenderDay Award (plus a great best of compilation from the nine best participants, including Christoph Pöhler, Beat Reichenbach, Georg Eifler and Jens Sesseg). They were presented by Francesco Faranna from Breitbild Visual Effects and Thomas Dinges.

1. Martin Lubich with some scenes from “Aras Tale”

3. Lino Thomas with his “Horstner Mühle”

With the awards on the way to their lucky recipients, the official part of the first day ended.

… , the cloud slowly dispensed, the people from further away drove to the youth hostel nearby to spend the night there – and in a Greek restaurant within walking distance. 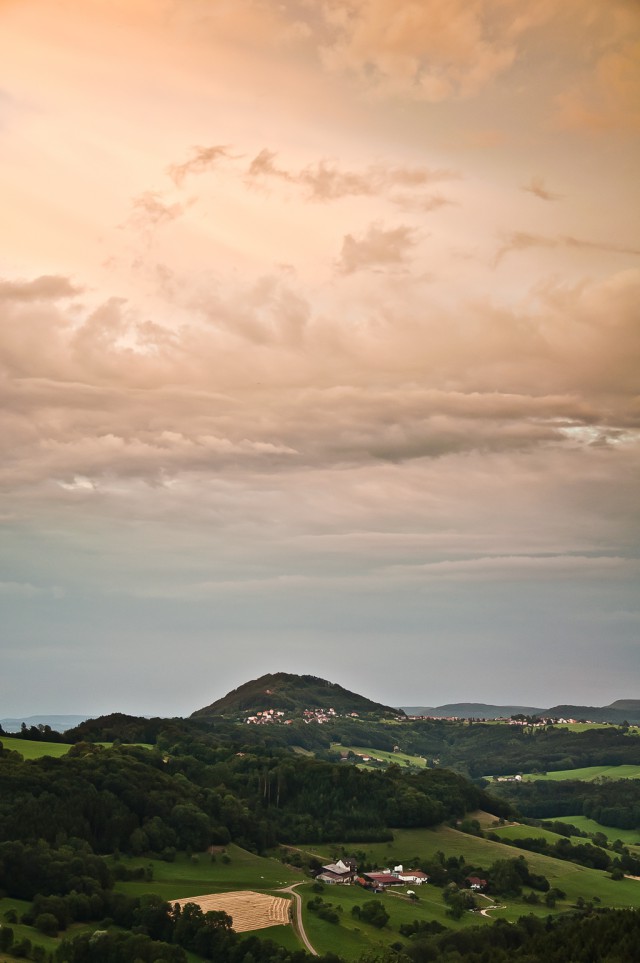 … and I wasn’t the only one using the evening to take some more photos, so you might see some interesting content from these people (and others), too: 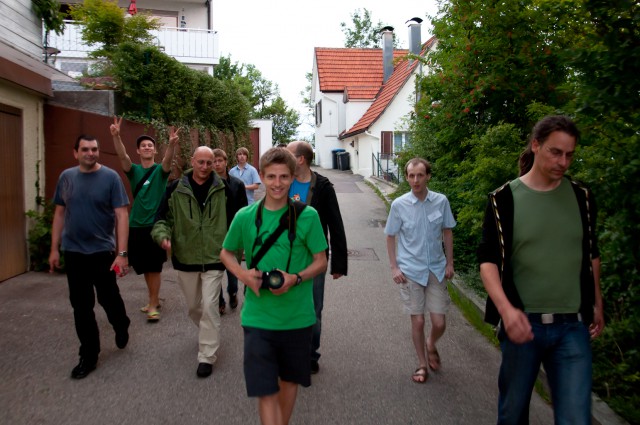 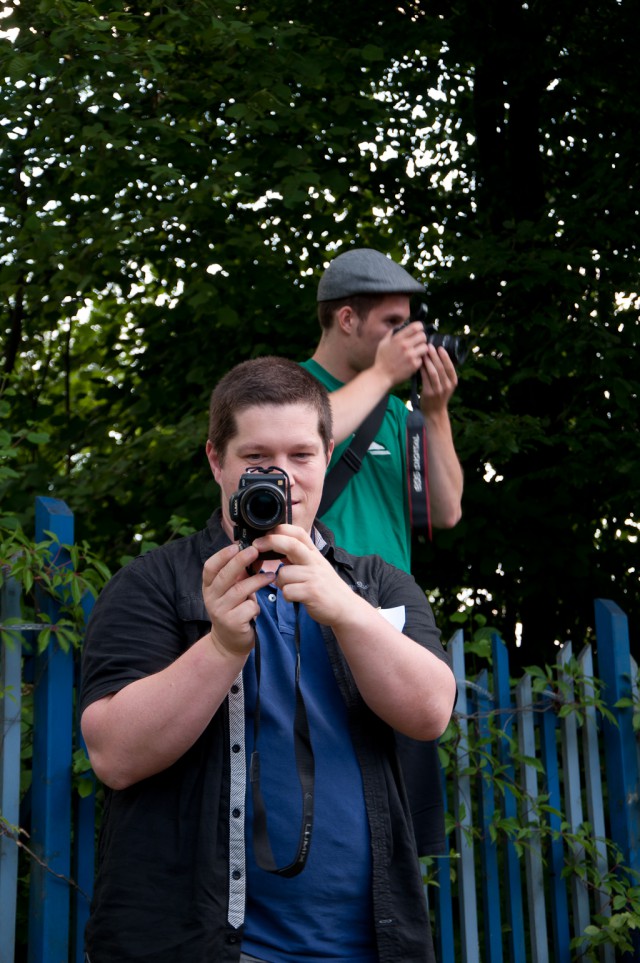 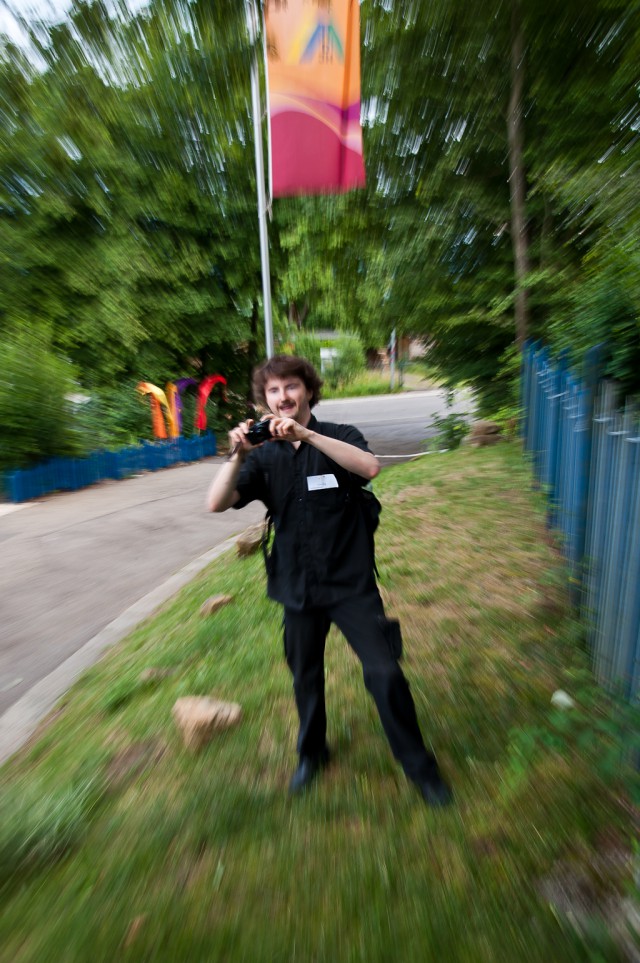 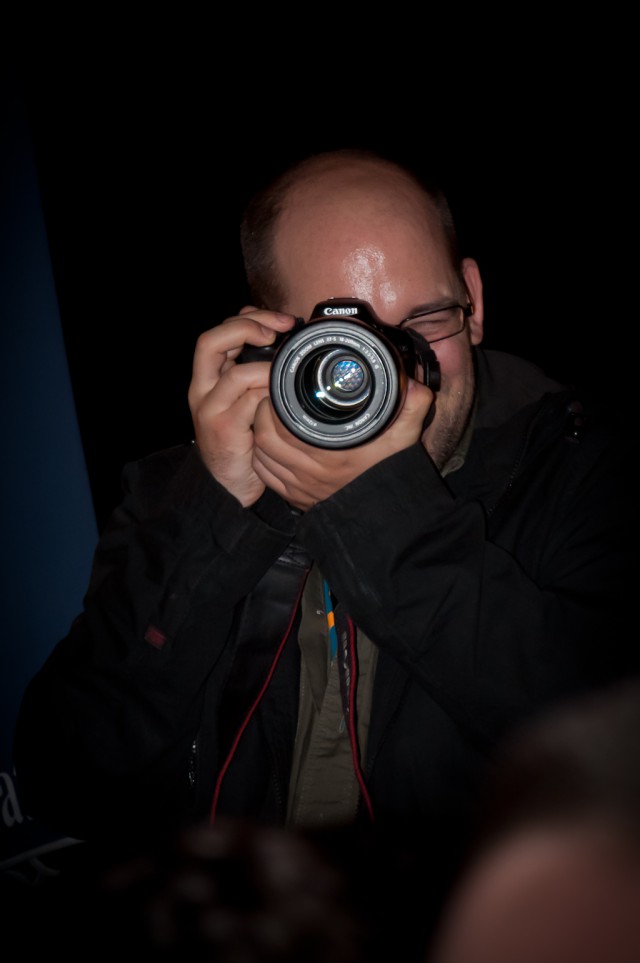 And that’s it for part one, stay tuned for the rest.

How other people saw the first day of BlenderDay 2011: